About the Urban Dreamscape Project

Posted on May 16, 2016 in Musings | Comments Off on About the Urban Dreamscape Project 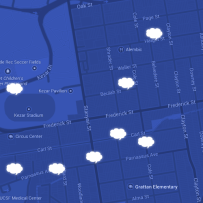 Urban Dreamscape: SF is a practice, a meditation on mapping, a psychogeographical research that breaks down divisions between internal and external spaces. It is a means of creating sacred space in the city. Through the practice, I explore the inner psychic spaces of my dream world, superimposing this intimate realm on top of the urban neighborhood in which I live.

I developed the Urban Dreamscape during a steamy New York City summer more than a dozen years ago, when I lived I lived at the corner of Avenue A and Fifth street in the East Village. My motivation was despair. During the two seasons preceding that summer, I had overindulged in some dream-like substances and buried myself in the task of writing my Master’s thesis. I got lost in my own internal workings. The urban dreamscape practice helped me ease out of the deeply solipsistic existence that had become my reality, a self-imposed state of solitary confinement that cut me off from my friends and the world in general.

As I developed and inhabited my urban dreamscape, I learned to linger at the border between dream and waking and between internal and external worlds, a useful way station in the slow transition back into the concrete reality around me. This process of terraforming the city with my dreams became a dedicated practice, a daily (or at least most days) ritual that connected me to the world. I turned an exploration into my psyche into an examination of my neighborhood. In contemplating what constituted me versus not me, I discovered a way of transforming the grimy, concrete neighborhood of the East Village into sacred space.

The Urban Dreamscape practice consists of weaving my own dreams into my neighborhood. In the case of San Francisco, I demarcate the area to the East by Clayton Street, to the South by an area just beyond Parnassus Street, to the West by Willard Street extending beyond Kezar Stadium and just into Golden Gate Park, and to the North by Haight Street. These are my stomping grounds, the places I walk most often. They are the places I want to matter.

I first conceived the idea of the Urban Dreamscape in an inspired flash on St. Mark’s Place one afternoon in early June, when an unusual relief carving on the top of a building caught my eye as I contemplated my previous night’s dream. Though I walked that part of New York daily for years, I’d never noticed that feature before. That first dream I placed contained only the small seed of what it grew into. My initial conception of the project borrowed from two books—Francis Yates’ The Art of Memory and Bruce Chatwin’s The Songlines. Over the course of the years, however, other ideas and practices have came to inform my own complex and multi-tiered understanding of what I’m doing.

I weave my dreams into the city by imprinting them onto notable architectural features, mostly buildings but also sidewalks and streetlamps and other elements common to any urban setting. I am a consultant with a home office, so I rarely have to wake up at a specific time. Most mornings, I lie in bed for a while savoring the night’s dreams. I recall dreams most days and have done so for as long as I can remember. Different images from the night return as I laze amidst the pillows, coasting between waking and sleep. I’ve found that as I attempt to remember entire dream narratives, sometimes shifting my position slightly can dislodge a dream memory or cause images or storylines to surface into my waking mind. Often the dream drifts just outside my consciousness and I balance the combination of effort and relaxation that recollection requires until some detail suddenly comes to me and, hopefully, brings the rest of the story with it. Remembering things works that way for me.

Once I have a dream narrative clear in my mind, I write it down. I prefer to enter the dream longhand in my beautiful dream book and then transfer it to the computer later. Sometimes, though, I go straight to digital. Once I have the dream fixed in my mind, I get up, get dressed, and leave the apartment, setting off randomly in some direction. I restrict myself to the boundaries I’ve established as my neighborhood. Within the confines of that space, however, I wander aimlessly. As I move through the space, I pay particular attention to my surroundings, really looking at the buildings, at the features of the city. Moving through my environment with that degree of highly focused attention, I see things that most people miss. My small part of San Francisco contains more notable features than you would imagine.

Eventually I spot the right place. No specific criteria determines where my dream will go; I let sudden impulse make that decision. Once I choose the destination, I contemplate its features, admiring the intricacies of a drainpipe, perhaps, or seeing a peaked roof or a decorative fence that I’d never noticed before. Breaking the dream down into bite-sized pieces—a specific image, a self-contained string of events, or a particular feeling—I work the narrative arc of the dream into a series of memorable units: an alien robot invasion; my discovery of a whale lying just below the surface of water; the visceral feeling of an albino python slithering over my hand. Then I associate each piece of the dream with a feature of the place I’ve chosen, one after the other in a line so the chronological order of the dream is reproduced by the scan of the eye over the architecture. Now the story has been embedded in the landscape. As I walk through my neighborhood, to the store or the bank or just out for a stroll, my eye catches some architectural feature and once again I find myself immersed in a dream narrative.

Though it may sound like a complicated process, my method for weaving my dreams into the city is actually quite simple. On September 7, I recorded the following dream in my dream journal:

I’m in a university setting, institutional buildings surrounding an outside quad with lots of students coming and going. I’m sitting with two friends, both electronic musicians, on a cement wall about eight feet high. I hand my computer down to a passer by so I can jump down. Because I’m leaping from a height onto concrete, people seem concerned for my safety. But when I jump I float down and land very lightly on my feet.

Then I’m in an orbiting spaceship. My alien race is preparing to transport about 40 of the students up the ship. We’re kidnapping them to study the human race. I’m fiddling with a very complex and seemingly ineffectual lock for the cell where we’ll put them. I don’t think the lock will work. I examine an array of other locks, none of which has any obvious locking mechanism. I express my regret to one of my alien compatriots over our plan to capture the students. She remembers that I spent time living among them and realizes that’s why I feel bad. “Right”, I reply, “you see, I like them”, by which I mean humans.

I placed this dream at the entrance to Kezar Stadium at the corner of Carl and Willard. I juxtaposed the university setting where I sat with my friends along the west-most zigzag hand railing; I put the floating jump onto the lamp post; the spaceship and intent to spirit away students I laid along the top of the booth and over the art deco “Tickets” sign; I superimposed my examination of the particular lock and then the array of locks across the entrance gate; and then I positioned my conversation with the other alien over top of the first pillar there

The images from my dreamscape generally do not bear any symbolic or meaningful relationship to the features over which they lay juxtaposed. Instead, I rely on the unusual nature of the architectural elements to contain the memory. Once a dream is placed, remembering it works almost the same as remembering a dream in the morning works. When I lie in bed in the morning struggling to recall a dream, often the memory of a single image will bring the entire narrative into my mind. In the same way, when I walk down the street and notice a piece of a dream, the single detail often brings the whole story of the dream flooding back. Over time, my neighborhood has become increasingly layered with my dreams. The resultant palimpsest of city and the narratives of my psyche provide increasingly complex and meaningful mappings of those spaces most important to me.

Click here to see a map of my San Francisco neighborhood with artistic representations of my dreams superimposed on top.