Home » All » Minutes of the August, 2012 Oneironauticum

Minutes of the August, 2012 Oneironauticum

Posted on August 10, 2012 in All, Event Reports | Comments Off on Minutes of the August, 2012 Oneironauticum 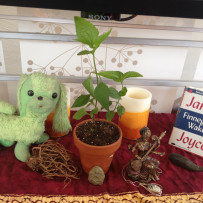 We also had a guest of honor sitting on our dream altar: A live Calea Zacatechichi plant.

Between arrival time, around 9:00 pm, and bedding down, we discussed various dream topics, as we usually do. For some time, we discussed Hypnogogia, the state of brainwave fluctuation that occurs as we fall asleep. For many people—in my experience, particularly those with short circadian rhythms—hypnogogia is the richest sleep cycle for dreams. Erik, Vibrata, and Dean, all short circadian rhythm people, share this tendency. Erik talked about the aural experiences he sometimes has during hypnogogia. He described hearing something like a radio station, playing wonderful music that he can tune into for seemingly long stretches of time. Dean reported a similar experience.

Richard then regaled us with tales of his experiences of learning astral projection. His technique involves maintaining awareness during hypnogogia, up to the point of actually falling asleep. At that point, just as you enter a slumbering state, you roll over on the bed. When it works, the astral body will separate from the physical body. Richard reported that, when he achieved this goal, he found himself outside his body, in his own room, able to see himself lying in the bed and to note the details of his actual bedroom.

I then pulled out my new favorite toy, the Zeo Sleep Manager. This device measures sleep cycles via a sensor-equipped headband that captures some level of brainwave activity while you sleep. This machine has been somewhat of a revelation to me. For the last decade, I’ve taught classes and given workshops and presentations during which I’ve presented a chart that explains the human sleep cycle. More or less the explanation you’ll read in textbooks, the chart I put together looks like an amalgamation of all the sleep charts I’ve seen over the years. But now that I have access to my own data, I realize how totally variable not only my sleep cycle is from the textbook standard, but even how much variance there is for me from night to night.

My Version of the Standard Textbook Dream Chart 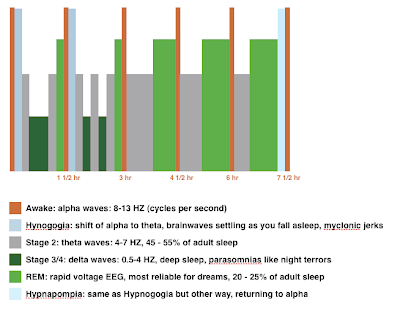 Some of My Own Dream Charts

After looking at sleep charts, we gathered together and drank our Calea Zacatechichi. Attendees chose between a tea I’d brewed and an alcohol extraction I’d made with the alchemical advice of friend of Oneironauticum Dale Pendell. Both concoctions tasted hellishly bitter. Four of our number also smoked some of the Calea. Then we went to bed.

In the morning, we shared our dreams over brunch. As a general trend, people experienced much more vivid dreams during the first part of the night, after we’d drunk the Calea. Most of us felt this ran counter to our normal pattern of remembering longer and more detailed dreams from the second half of the night. A few of our numbers tried waking up at 5:00, just before periods of REM get longer (see above chart). They reported vivid dreams throughout the night.

As happens often at the Oneironauticum, some common themes arose among dreams. Many of us had meta-dreams about dreams, or about the Oneironauticum event and the dreamers who participated in person. The color red appeared in more than one dream, as did Central and South American references. A couple dreams involved repeating versions of the dream. Several dreamers also reported unusual physical components to their dreams, such as arousal, unusual heat, and in the case of one remote dreamer, the throwing of a pillow across the room.