Minutes of the June, 2015 Oneironauticum

Posted on September 9, 2015 in All, Event Reports | Comments Off on Minutes of the June, 2015 Oneironauticum 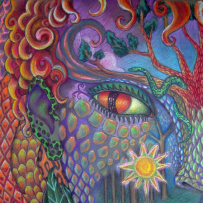 This Oneironauticum was part of the Women’s Visionary Congress, held at the Institute of Noetic Sciences in Petaluma, California. Yours Truly (Jennifer Dumpert) gave a talk on working with oneirogens (look for the video of that talk on the Urban Dreamscape page of this site soon) and distributed oneirogens so the entire conference population could participate. As always, we also had many remote participants. A good proportion of our remote participants continue to hail from Mexico and Central and South America. Hola soñadores!

With such a large population of participants, we experimented with several different oneirogens. Some people made cachets with a combination of mugwort (good for vivid, psychedelic dreams), rose (which provides pleasant dreams), and lavender (a sleep aid, take note insomniacs!). Scent is one of the most powerful oneirogens available. Hearing and smell are the two senses unaffected by the chemicals that impede movement and speech during dreams, to prevent us from acting out what we’re experiencing.

Some participants worked with Silene Capensis. Used by the Xhosa people from South Africa for the purpose of oneiromancy (divination through dreams), the ground, dried root is whipped into a foam that is eaten before bed. Dreams  often include the color white and feature encounters with wise teachers or ancestors.

Others practiced liminal dream exercises, surfing the edges of consciousness though hypnagogic and hypnopompic dreams, those floating and sometimes uncanny trance states we pass when we’re falling asleep or waking up. This work is particularly effective for people who have a hard time remembering dreams, who nap, or who regularly take things that interfere with dreams (sleep aids, THC, alcohol and caffeine). Liminal dreaming can also be used as a stepping stone toward learning lucid dreaming.