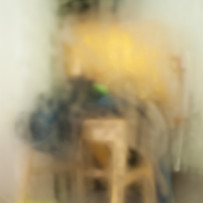 I had some visitors. In the beginning part of the night, there were these two dudes, one of them had like this weird futuristic hairdo, like a hexagon on his head. He was like sitting on the side of my bed, right in this room but without waking up anyone else. It was very realistic. He showed up just as I was falling asleep to the music [Robert Rich’s piece Somnium, to which we were sleeping]. It was definitely a hypnogogic dream.

So the hexagon hair dude leaned over and said quietly to me “I think the music is a little too loud, are you going to turn that down? I think you should turn that down.” Then looked around at you all sleeping and asked me “Do you think everybody is asleep? I think someone over there is actually awake.” And he was totally just like a guy in the space, like one of us asleep.

Later in the night I had another dream, also in this space, where there were beautiful metal flowers slowly opening, and there was another guy who had really delicate metal lattice work on his head. We were at a party. There was a lot of people there and somebody had brought a bottle of spray DMT, it was like aerosol can and people would lie back, put it in their mouths and then kind of fall on to the ground. I did spray DMT and then I had a trip in the dream.

In the DMT trip, I went to this cave where there is all these pirates who were partying and at first they were really pissed that we were there. They were like, “What the hell are you are doing here? This is our scene!” But then one of them said something about Buffalo, New York and I exclaimed, “I’m from Buffalo!” so then they all relaxed about it, “Oh you alright then.” The pirates were jumping onto these big blocks of ice and then into frozen lakes of water that seemed like they’d be really cold.

I came out of the trip and I was back kind of here in the room, but it wasn’t here, it was in a hotel room. Everybody had left and we had totally trashed the room. So, I kind of snuck out really guilty, then I was running down the street at sunrise, because we trashed the hotel.